Most good IPOs get oversubscribed and few applicants get share allotments. Subscribe to JainMatrix Investments to get their pre-listing IPO notes, and invest successfully.

Here is a note on Avenue Supermarts Ltd. (DMT) IPO.

News, Updates and Strategies of DMT 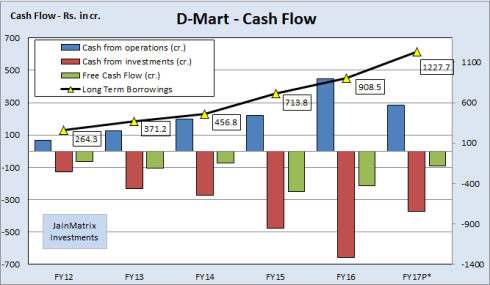 Positives for DMT and the IPO

Risks and Negatives for DMT and the IPO

DO YOU FIND THIS SITE USEFUL?

This document has been prepared by JainMatrix Investments Bangalore (JM), and is meant for use by the recipient only as information and is not for circulation. This document is not to be reported or copied or made available to others without prior permission of JM. It should not be considered or taken as an offer to sell or a solicitation to buy or sell any security. The information contained in this report has been obtained from sources that are considered to be reliable. However, JM has not independently verified the accuracy or completeness of the same. Punit Jain intends to apply for this IPO in the Retail category.  Other than this, JM has no known financial interests in DMT or any group company. Neither JM nor any of its affiliates, its directors or its employees accepts any responsibility of whatsoever nature for the information, statements and opinion given, made available or expressed herein or for any omission therein. Recipients of this report should be aware that past performance is not necessarily a guide to future performance and value of investments can go down as well. The suitability or otherwise of any investments will depend upon the recipient’s particular circumstances and, in case of doubt, advice should be sought from an Investment Advisor. Punit Jain is a registered Research Analyst under SEBI (Research Analysts) Regulations, 2014. JM has been publishing equity research reports since Nov 2012. Any questions should be directed to the director of JainMatrix Investments at punit.jain@jainmatrix.com.