BF Utilities, a part of the Bharat Forge group, is engaged in developing the Bangalore – Mysore Infrastructure Corridor. The high potential project has been stuck for over a decade due to land handover issues, and the firm is making losses.

However recent reports indicate that it may be close to resolving legal disputes, and is raising a second round of PE funds for project execution. The share has recently crossed its 200 DMA. Investment in BF Utilities is an act of faith in the management, an understanding of how badly this project is needed, and a confidence that the risk return balance is tilted in favor of investors at this price. Investors with a High Risk, High Gain appetite may look to invest now for a 3-year horizon.

BF Utilities (BU) is part of the Pune based Bharat Forge Group, and is focused on Roads and Power projects. Lets analyse this stock to see where it’s heading.

Details and Updates of the BMIC project 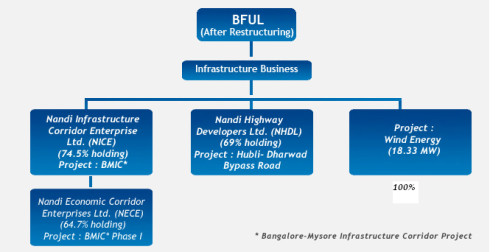 Advice and Recommendation for BF Utilities

Do you find this site useful?

Add your comments/ queries below

One thought on “BF Utilities – This can be a NICE buy”